Broadcast through television and radio 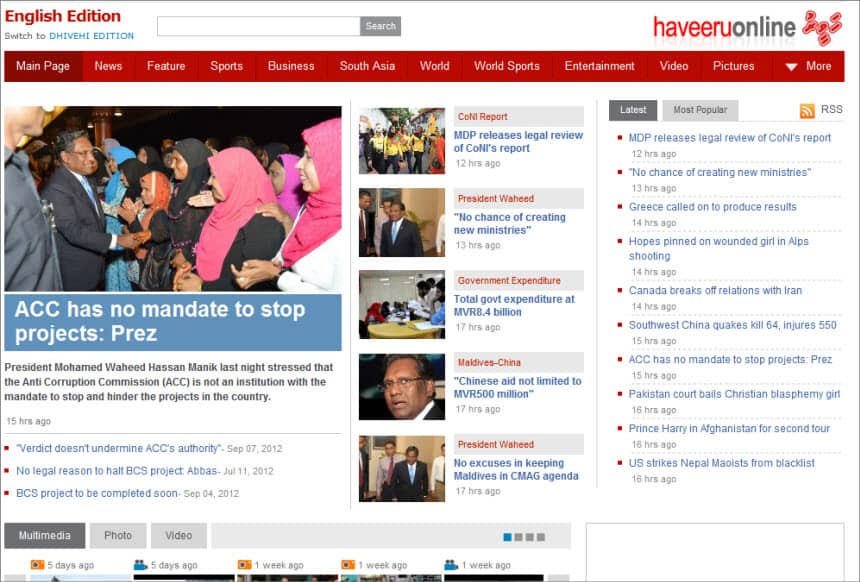 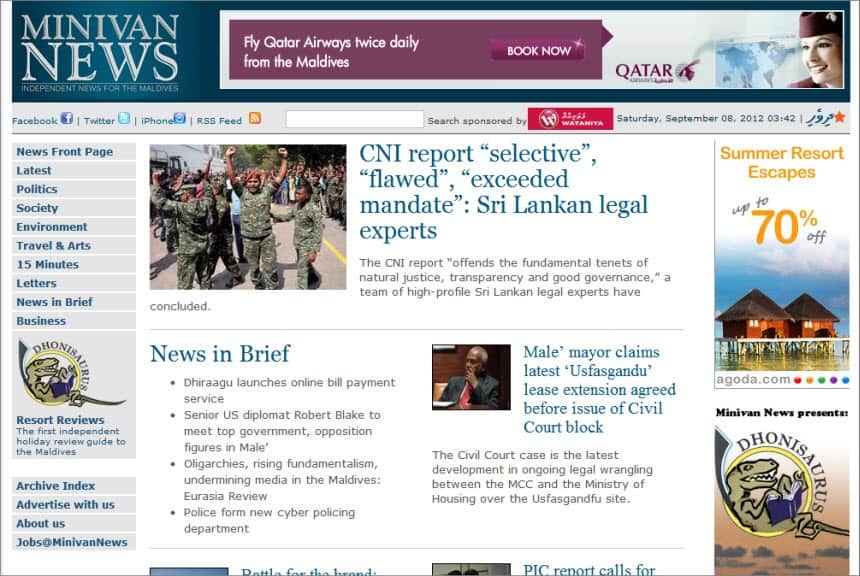 Media landscape
The Maldives has about 100 registered media outlets, out of which about 25 are actively publishing stories and reports in English and Dhivehi, the local language. The state broadcasters – Television Maldives (TVM) and radio Dhivehi Raajjeyge Adu (“The Voice of the Maldives”) – no longer have a monopoly but their influence is still significant. The development of Raajje TV, created in 2010, provided the opposition with a platform and the public with an alternative to the government propaganda that saturated the airwaves during Maumoon Abdul Gayoom’s 30 years as president (1978- 2008). The Dhivehi-language daily Mihaaru dominates the print media sector, while Maldives Independent, an English-language news website, has become a benchmark for investigative journalism – until it closed operations at the end of 2019.

Political context
The state of journalism is largely determined by the political context. Abdulla Yameen, the president from 2013 to 2018, ruled with an iron fist but his successor, Ibrahim Mohamed Solih, made several concrete commitments with regard to press freedom during the 2018 election campaign. One of his promises was kept when parliament repealed the draconian 2016 defamation law, which had been widely used by the previous government to pressure independent media outlets.

Legal framework
Article 28 of the constitution proclaims press freedom and says: “no person shall be compelled to disclose the source of any information that is espoused, disseminated or published by that person.” This constitutional safeguard was threatened by the Evidence Bill presented to Parliament at the end of 2021, which would allow the courts to compel journalists to reveal their confidential sources. A few months earlier, a parliamentary committee had asked for the confidentiality of a source in a Mihaaru News article to be lifted. The Maldives Media Council (MMC) and the Maldives Journalists Association (MJA) play a key role in combatting such initiatives.

Economic context
Advertising is allocated without any transparency or oversight, which poses serious problems for the independence of media outlets. In several cases, media outlets with no significant readership received large sums of money from state enterprises. In return, the editors were told to remove an article that had caused displeasure or were asked not to cover a sensitive subject.

Sociocultural context
The Maldives recognizes Islam as the state religion and used Sariatu as its legal system. This is a local version of the Sharia that traditionally advocates tolerance and moderation. But journalists are often subjected to threats and intimidation by Wahhabi-influenced religious extremists. During the 2010s, the government openly exploited this tendency, legitimising fundamentalist attacks on “secular” voices. Freelancer Ismail “Hilath” Rasheed was stabbed in the neck in 2012 after denouncing the Islamist excesses developing within Maldivian society. He narrowly survived and opted for self-imposed exile for the sake of his safety.

Safety
Circles linked to Al Qaeda with possible ramifications within the police were suspected of being responsible for the 2014 abduction of Ahmed Rilwan Abdulla, a journalist whose body was never found, and the 2017 murder of Yameen Rasheed, a blogger who was stabbed to death. But no one was ever punished in either case. A commission of inquiry was created in 2018 but none of its members has ever said anything about their investigations and it is not known whether any progress was ever made. This intractable impunity taints the press freedom situation in the Maldives. Meanwhile, the issue of sexual harassment of women journalists is slowly emerging.